“These women are my heroes.”

Arthur Karuletwa’s heroes are a group of all-female coffee farmers from his home country of Rwanda. They call themselves Hingakawa, which means “let us grow coffee.”

“These women have picked up this country from bare bones where the rest of the world had looked the other way. They needed each other like trauma needs counseling,” said Karuletwa, Starbucks director of global coffee traceability.

After the 1994 Rwandan genocide, trust was broken. The country was in turmoil.

In the years that followed, coffee has helped bring reconciliation and revitalization to the country. And it wouldn’t have been possible without the women of Rwanda, including the Hingakawa group.

As the women began working to rebuild the coffee industry, they had to come together and trust each other again. They’ve shown grace and forgiveness at times when it might have seemed unimaginable.

It’s the same tool they now use to prune and weed their coffee. Karuletwa says the simple act of using the machete requires moments of connection and healing.

“These women wanted to bring their coffee together for the sole purpose of bringing themselves together,” said Arthur Karuletwa, Director of Global Coffee Traceability.

The Hingakawa group, which started off with just a handful of women, is part of a larger co-op, Abakundakawa. Karuletwa says it’s an act of bravery for the women to ask permission from the co-op to actually separate their coffee from the rest of the farmers.

“You have to understand that in some of these cultures…gender equality is still what is regarded as taboo. Culturally, it’s not embraced, it’s not well yet understood. It’s still foreign and sometimes borderline dangerous,” Karuletwa said.

Today, there are around 150 members in Hingawaka. The women grow and process their own coffee together, including Starbucks Reserve® Rwanda Hingakawa. Karuletwa describes the coffee as elegant, just like the women who produced it. 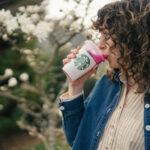 For a summer that’s sure to be the best one yet, find vibrant, colourful, reusable drinkware at Starbucks to pair with any summer mood.

Here are the important things to know about today’s Annual Meeting of Shareholders.