When Starbucks launched its first loyalty program, it was based on the simple idea of an old-fashioned punch card (remember those?), rewarding loyal customers for their in-store purchases and encouraging them to keep coming back. But instead of paper cards, customers could register their Starbucks gift cards online to earn benefits, including a free birthday beverage.

In 2009, the first Stars were awarded in Canada as the Starbucks Card Rewards merged with the Starbucks Gold Card membership program to create a single streamlined Starbucks Rewards loyalty program. Customers began collecting Stars and soon the program expanded into the groundbreaking Starbucks app where paying with the app became possible, followed by the launch of the order ahead and pay feature in the app in 2015.

The flexibility and choice of rewards expanded too, with tiered rewards starting in 2019 to include merchandise and at-home coffee as well the ability to earn Stars toward free Rewards from the day members joined.

Today (Sept. 15) marks the next evolution in the industry-leading loyalty program, with even more ways to pay and earn Stars through the Starbucks app. At company-operated stores across Canada, Starbucks Rewards members can scan their app and then pay with cash, credit/debit cards, or select mobile wallets and earn Stars toward free items. Members can also save these payment methods directly in the Starbucks app to earn stars when paying.

So, just how many Stars have been awarded so far? Let’s quiz your knowledge about Starbucks Rewards below:

A How-To Guide for Digital Ordering at Starbucks 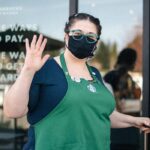 At a Glance: Our Response to COVID-19

April is earth month, but our commitment to reducing environmental impact is year round. We’re innovating, testing and learning from our store partners (employees) to find the most effective ways to become resource positive for the future

Spring has officially sprung at Starbucks. Beginning Tuesday, March 1, customers can keep cool without the winter chill with the NEW Iced Toasted Vanilla Oat Shaken Espresso, as well as an array of colourful and delicious fan-favourite beverages, bakery items and packaged coffees.