Food insecurity has risen sharply with the pandemic in Canada, growing by nearly 39% in the first few months of the crisis, resulting in 1 in 7 Canadians struggling to feed themselves and their families.* In 2019, Starbucks announced FoodShare in more than 250 stores in the Greater Toronto Area. While COVID-19 challenges put a pause on the expansion plans last year, Starbucks Canada and The Starbucks Foundation donated over $1 million of food and cash in 2020 to food banks, including Second Harvest  and Food Banks Canada, and remains steadfast on helping to combat hunger and minimize its contribution to the wide-scale problem of food waste.

Beginning next month, Starbucks will expand FoodShare with Second Harvest to all Ontario Starbucks stores, followed by additional market launches in British Columbia, Alberta, Saskatchewan, Manitoba, Quebec, Yukon and Atlantic Canada. The company expects the expansion to be complete by end of September.

“Food insecurity is an enormous challenge in Canada that worsened during the pandemic,” says Luisa Girotto, vice president of Public Affairs, Starbucks Canada. “We want 100 per cent of our donatable food to go to those who need it most in the communities we operate in, while helping to eliminate food waste and make progress towards our aspiration of becoming a resource-positive company.”

“We’re delighted to see the expansion of Starbucks’ food donation program, which reflects the strength of their commitment to keeping healthy, delicious food where it belongs: with people, not in landfill,” said Lori Nikkel, CEO of Second Harvest. “As we continue to deal with the pandemic’s impact, supporting the health of communities and the environment is crucial and we all have a role to play, now more than ever. Starbucks’ leadership in food recovery will have a major, national impact.”

Safely donating chilled, perishable food including breakfast sandwiches, paninis, protein boxes, yogurt, milk and dairy alternatives like soy, oat and coconut is critical and Starbucks and Second Harvest  have implemented standards to ensure that all food maintains the correct temperature, texture and flavour so that when it reaches a person in need, it can be safely enjoyed.

How rescuing food is impacting lives

Since Starbucks FoodShare first launched in Ontario, the company has made over 20,000 donations, providing 382,986 meals to their local communities. Thousands of Canadian Starbucks partners (employees) have helped by donating food as part of their store closing routine.

“Partners take great pride in being the catalyst for this program. Every time they work a closing shift, they are reminded of their impact by putting food in the refrigerator to be recovered for people who need it instead of the trash,” says Girotto.

The impact of Starbucks FoodShare can also start to be seen and heard in local communities across the country through the difference it’s making on the non-profit organizations and the people they seek to help.

Our commitment in action

In 2020, Starbucks committed to a resource-positive future, formalizing its sustainability commitment to cut its carbon, water, and waste footprints by half by 2030, aspiring to give more than it takes from the planet.

Starbucks FoodShare helps us limit avoidable food waste and diverting food surplus from landfill. To date, the program has prevented the release of more than 314,000 lbs of greenhouse gases and FoodShare will continue to be just one of the ways Starbucks is partnering with others to help take care of the planet we share. 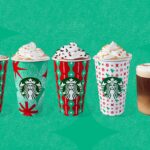 The Holidays are Back at Starbucks with Seasonal Sips and Festive Food!