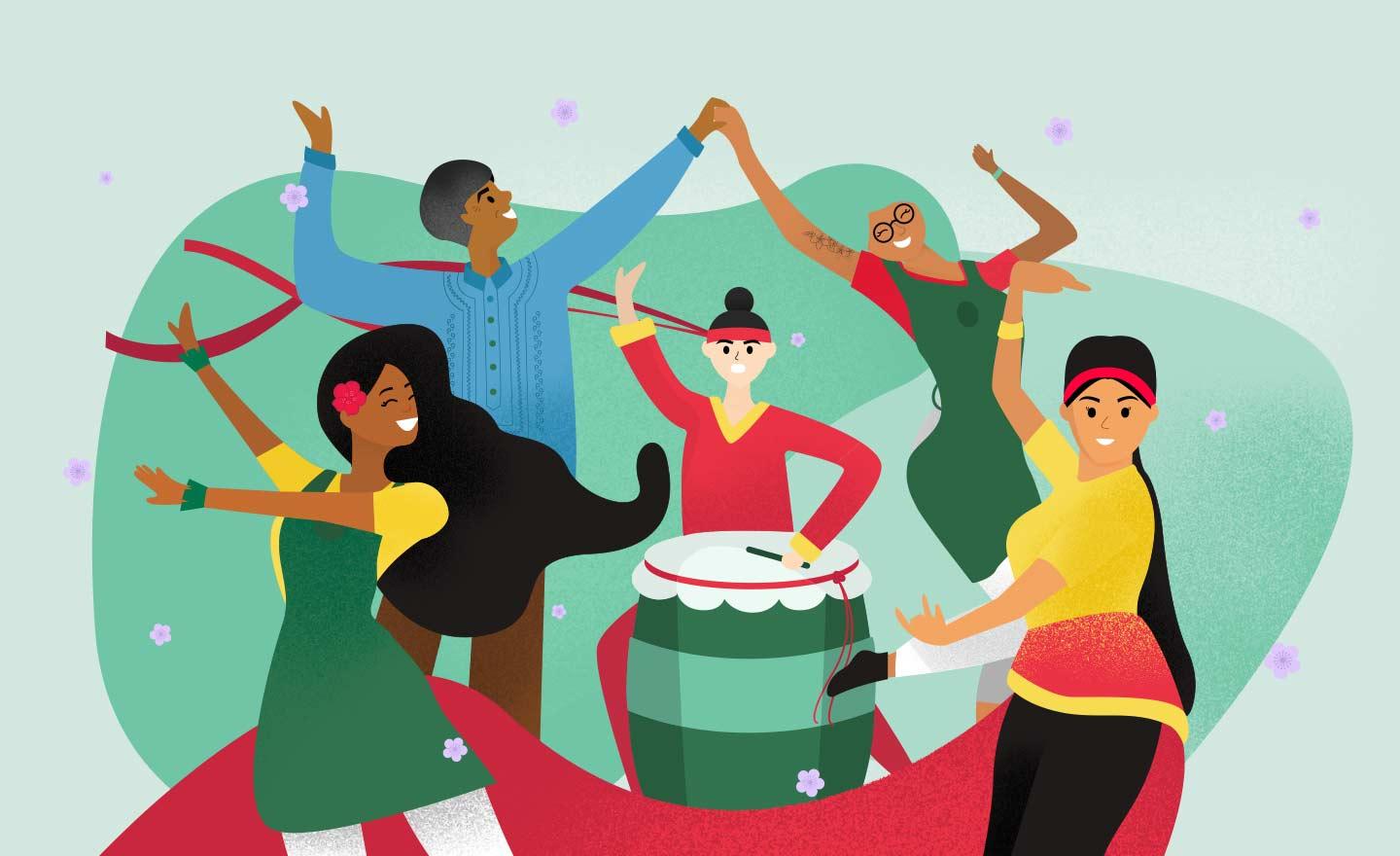 The month of May marks the start of Asian Heritage Month in Canada, making it the perfect time to learn more about the many achievements and contributions of Asian communities across the country and just how they have made Canada feel more like home. It is a call to action for all of us to come together to use our differences and unique experiences to create and foster community and belonging. In doing this, we can continue to create welcoming spaces, stop anti-Asian racism and discrimination, and truly celebrate each other.

In their own words:

Starbucks partners embrace opportunities to be as inclusive as possible, and this means recognizing the many identities within Pan-Asian communities and continually educating ourselves. Born out of a desire to foster meaningful connections between and elevate Pan-Asian partners and allies, Starbucks partners and Canada Pan-Asian Partner Network members share how their differences bring them together as one community of partners.

Jam left the Philippines in 2004 to work as a domestic helper in Hong Kong before making her way to Canada in 2009 under the Live-In Caregiver Program for childcare—the easiest path to Canada. Leaving home alone in hopes of planting roots elsewhere is a task that requires courage, and that is something Jam needed to tap into to embark on this new journey to a brighter future. “Filipinos take pride in family; it’s always family first. I was so homesick for years. Leaving my home country was the hardest and the scariest thing I’ve ever done, but it is the best decision I ever made for myself”, she shared. “Moving allowed me to start a new life and be the person I want to be.”

“The best thing about living in a different country is meeting new people and building new friendships. Meeting people with different backgrounds and perspectives from diverse cultures helped me understand the world better.” 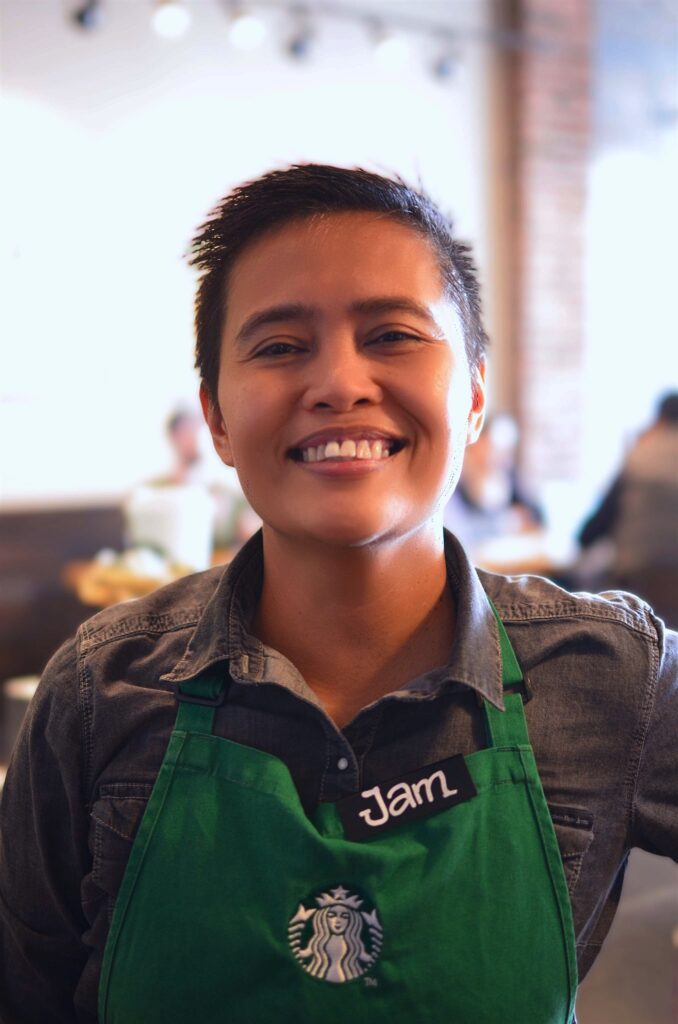 “What I love about Starbucks is that it feels like home. Before I joined Starbucks, I didn’t feel like I belonged anywhere. My Starbucks community made me feel like I matter and that I belong. No matter who I want to be.” — Jam, store manager

Summer came to Canada about a decade ago to gain work experience and learn English, and she decided to stay after she fell in love with just how much room there was to be herself. In Summer’s case, the diversity of her surrounding community and the differentiating factors of all the cultures she was exposed to were the keys to her feeling like she belonged. “Here, we have many different people from different backgrounds, so I feel free from the pressure of following the majority in the society. Here, we embrace and celebrate our differences”, she shared. Summer’s appreciation for her Korean roots has grown deeper through this freedom.

“After I moved here alone, I had a hard time finding a place where I belonged, but since I started working at Starbucks, I’ve felt that I belong to something bigger. It’s bigger than just a workplace. Starbucks gave me friends and mentors. And now, I want to create a store environment where I can provide that home to partners who moved here from overseas.” – Summer, store manager

Being exposed to other cultures and becoming aware of his differences is what ties the appreciation of life closer to Jason’s world and way of living. Having been raised in the Taiyuan region of northern China, he first experienced foreign cultures during a junior high field trip to Japan. This very eye-opening experience inspired him to explore other countries and cultures. “Getting to know different cultures helped me open myself up to making lots of friends from different backgrounds with different perspectives, cultures and practices,” Jason shared about his deep sense of respect and value for folks from diverse backgrounds.

“I love experiencing and hearing valuable lessons and stories while learning something new from others. It helps me understand how people do things in their own ways, which allows me to develop a deeper sense of empathy.” 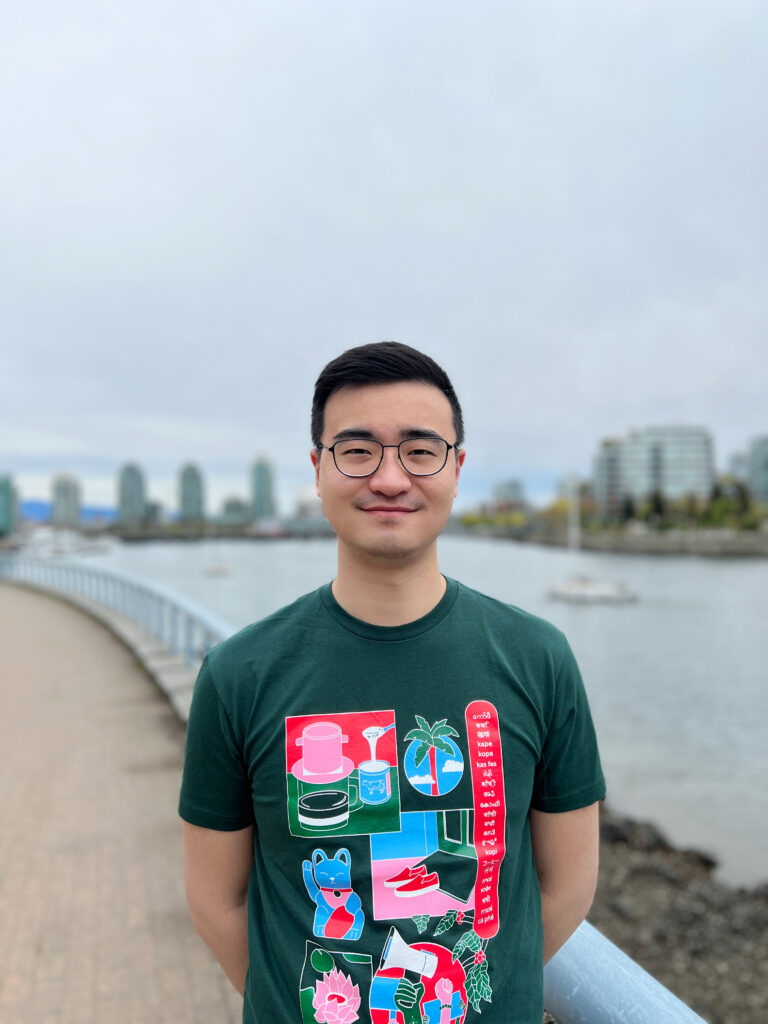 “Racism and discrimination still happen, and we have a long way to go as a society. But at Starbucks, I always feel like I belong and that my voice, no matter what language I choose to speak in, will be heard. Over the last few years, I’ve trained my new partners with this in mind: No matter what background we come from, we will always have a safe and welcoming space to share our unique stories and connect over a cup of coffee.” — Jason, assistant store manager

Born and raised in Mauritius before successfully pursuing a bachelor’s in Business Management in Melbourne, Camben made his way to Canada for love—to be closer to his then-girlfriend, now wife. Living in different countries allowed Camben to learn about and embrace diverse cultures, which empowered him to experience what it’s like to be a part of a new community that they were able to form. “It also gave me cultural awareness and acceptance, which helped me break down cultural barriers while interacting with people of different backgrounds,” he shared.

“What I love about Starbucks is being able to work in an environment where diversity is top of mind and the sense of belonging that comes with that. I feel supported and mentored, and empowered to actively live by the mission and values to be a better person.” — Camben, store manager

With community at the center of all that he does, meet Kal, the Starbucks partner known for his commitment to uplifting those around him

From a very young age, Kal—a Starbucks partner of Filipino and Spanish descent—moved around quite a bit, from the Philippines and Japan to Korea and Vancouver, before eventually landing in Calgary. Though these moves meant that he had to restart a few times, he sees his exposure to various cultures as the silver lining he’s grateful for. “We’ve been around the block, but I’ve been exposed to many cultures, and for that, I’m thankful.”

His mother successfully planted new roots for her family through a program similar to what is offered via ECSSEN Career School (ECSSEN), so he’s always had a passion for community empowerment initiatives. He spent much of his youth tutoring and volunteering, some of which was done through an ECSSEN program alongside his family.

His passion and awareness of ECSSEN were reignited when he found out that some of his store’s FoodShare donations were going to ECSSEN. ECSSEN is a Canadian non-profit organization that helps immigrants and youth gain work experience and skills through workplace programs and partners with agencies to help immigrants adjust to society through volunteering and counselling. Kal believes in the organization so much that he’s even referred a new partner from his store location to ECSSEN’s programs. As a member of Starbucks Canada’s Pan-Asian Partner Network, Kal has advocated for diverse, inclusive, accessible, and equitable environments and spaces in and out of the shop. So, when the opportunity arose, he naturally began his effort to secure a Neighbourhood Grant for ECSSEN.

The Starbucks Foundation’s Neighbourhood Grants program supports grassroots, community-led charities through catalytic investments in the form of small grants that range from $1,000 to $10,000. Through this unique program, The Starbucks Foundation invites Starbucks partners to nominate a local organization in their community to help build sustained local impact and inspire increased partner engagement with their communities. Since 2019, Starbucks partners have helped more than 3,500 organizations across North America, amounting to more than $7.5 million in grants.

Why ECSSEN was a natural fit

“When we think of our Mission and Values as Starbucks partners, ECSSEN aligns most with my understanding of these and my personal beliefs,” he shared, speaking to how natural it felt to help those who helped him and his family in the past. Knowing first-hand the challenges that often come with adjusting to a new space, Kal saw himself in the many people that ECSSEN helps and uplifts. He’s prioritized supporting critical organizations that ensure everyone can feel a sense of belonging. “I always appreciate things that can take someone from alienation and isolation to acceptance,” he shared.

Beyond the Neighbourhood Grant that he secured, Kal also makes personal donations whenever he can and is looking to get more involved with ECSSEN’s initiatives again now that he’s done school. “After graduating and being done with school forever [haha], I want to focus on advocating for diversity, representation and inclusion through my work. I started a production company with my close friends. We’re starting slowly, focusing on our local community northwest of Calgary, but I want to expand. Maybe I can even produce something for Starbucks one day”. 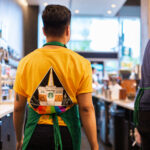 How we’re wearing our Pride on our sleeves