When Starbucks introduced its first holiday cups back in 1997, the word “selfie” had not yet been invented. Facebook and Twitter were still years away. Still, those holiday cups created buzz.

Sandy Nelson, then a Starbucks designer, created that first set of holiday cups, selected from over 100 design concepts. They weren’t red – but instead were wrapped like a gift in rich shades of magenta, sapphire, and emerald and purple. The design featured a linoleum block-style pattern with swirls and hand-drawn holly leaves flecked with coffee beans.

Nelson remembers the first time she saw customers carrying cups with her designs. She was visiting Anchorage, Alaska for Thanksgiving, and stepped off the plane to see a Starbucks kiosk piled high with stacks of colourful cups she had designed.

The next year, the holiday cups made an even bigger splash as customers were invited to “embrace the warmth” of the holidays with a cup in purple hues. Then in 1999, the cups featured a candy-apple red design for the first time, and a new icon was born. Before long, pop culture websites featured countdown clocks anticipating when cups would be “red again,” and the cups popped up everywhere from nascent social media platforms to late-night talk shows. Year after year, the excitement around the holiday cup seemed to grow and the cup itself became emblematic of the season.

“What’s happened now in popular culture is that the appearance of the red cup signals to people that it’s time to celebrate the holidays,” said Sandy Nelson. “Who would have thought 25 years ago that would happen?”

This year, Starbucks is introducing a new set of four designs for the holidays, wrapped like a gift for their customers just as they were 25 years ago.

“Looking back at all the years of holiday cups, you can see the commitment to design and artistry and all things handcrafted,” said Gary Jacobson, Starbucks creative director for this year’s holiday campaign. “I think that’s why they have become part of a lot of people’s holiday traditions. They just invite people in.”

Read on for a look at the last 25 years of holiday cups, plus this year’s new design:

With the first holiday cups, customers could enjoy a Christmas Blend brewed coffee in one of four jewel-toned hues.

“Coffeetown” was the theme for the Y2K cup, depicting a whimsical village of coffee pots, set against a glittering nighttime sky.

Giving the gift of Starbucks became easier than ever this holiday with the introduction of the first Starbucks Gift Cards. The cups themselves are designed to look like a present, trimmed with green and red ribbon and old-fashioned postage stamps.

Peppermint Mocha makes its debut this year, and a cup design that featured white line art, an illustration style that returned again in 2005 and 2016.

Shadows dance across a fanciful scene with shimmering stars and snowflakes.

The Starbucks logo is reminiscent of an evergreen wreath in this year’s cup design. The cup was also the star of a Starbucks video featuring the cup fixed atop the roof of a yellow taxi speeding through the streets of San Francisco.

This nostalgic design features white woodcut-style drawings and a string of holiday lights twinkling along the rim, along with a reminder that “It only happens once a year.”

Ice skaters twirl on a frozen pond as snowflakes gently fall in this quiet winter scene.

A field of reindeer and a single white dove are depicted in a moonlit woodland landscape with an overlay of a cozy knitted pattern.

Caramel Brûlé Latte make its debut this year, along with a cup design that featured cut-paper ornaments inscribed with the words “joy, hope, love, light, peace” hanging on sprigs of evergreen.

The cups take on a more modern vibe with new holiday characters catching snowflakes in a palette of red, white and gray.

Carolers sing, an ice skater spins, and a dog sleds down a hill with these series of three holiday cups. Customers make these merry scenes come to life with Starbucks Cup Magic, an augmented reality app.

The holiday characters, including a jaunty snowman, come in for their close-up in this design series with bold accents of navy and gold.

The cup features a swoop of coffee cherries, coffee flowers and vintage ornaments painted in a deep garnet with touches of gold.

“Let there be bright” is the theme for the holiday, with fanciful brushstrokes in bold colours.

The cup features a two-toned ombré design, with a bright poppy colour on top that shaded into a darker cranberry below.

For the first time, Starbucks features customer-created holiday cups with 13 designs from six countries around the world, all with hand-drawn white against a red background.

Starbucks unveils its first white holiday cup that customers could colour in themselves, with a pair of hands connected with swirling ribbons and splashes of red and green. Later in the season, a red cup debuted with a white heart inviting customers to “Give Good.”

The suite of cups celebrated the spirit of yesteryear with a modern twist, with doses of vintage colours and patterns and reinterpreted with graphic flair. The set of four designs featured snippets of Starbucks holidays past – a star, a branch of coffee cherries and a flame.

A perfectly wrapped gift inspired this series of four designs in our signature colours of red, white and Starbucks green. Typography is used as the main illustrative element for three of the designs, with whole letters playfully danced like musical notes (and even sprang to life on Instagram using augmented reality). Irish Cream Cold Brew made its debut this season in a special holiday cold cup with dancing letters that spelled “merry coffee.”

Designers started with little ribbons like washi tape (a decorative, adhesive tape) and wrapped them in different ways on cups. They brought in greens and a shade of red that’s a little brighter than the shade Starbucks may be famous for to give it an extra pop. The cups reminded customers to “Carry the Merry.”

With shimmering ribbons, a splash of colour and a sprinkle of stars – this year’s designs are wrapped up like gifts for the holidays. This year’s theme features festive colours of red, green and white with playful touches of lilac.

The classic holiday red and Starbucks green are joined with accents of mint and sparkles in this set of cup designs, a perfect way to celebrate the 20th anniversary of the Peppermint Mocha. 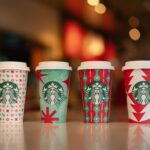 It’s Red Cup Day on November 17! How to get your free collectible Starbucks Red Cup

Ring in the holidays with a collectible red cup from Starbucks. On November 17, order a handcrafted holiday (or fall) beverage at a participating store in Canada and receive your free 2022 limited-edition reusable red cup (16 oz). Quantities are limited, while supplies last. The red cup giveaway is available however you order, including mobile […]