From new pronoun pins to the integration of Starbucks Canada Pride T-shirts, Starbucks Canada continues to fiercely support the LGBTQIA2+ community and nurture the well-being of everyone we connect with, including our partners (employees) and coffee farmers to the customers in our stores and individuals in our communities.

And at the forefront of this collective is the Starbucks Canada Pride Network, a coalition of dedicated Starbucks partners who strive to make their stores, and Canada, a more inclusive and safe space, from the nation’s capital to the western shores of British Columbia, and beyond.

“I think the early days for us was setting up the committee, getting all the right people around the table to understand what we wanted to achieve,” says Melissa. “What were our goals? How can we show up for our partners in a way where we can provide some celebration as well as an education piece and, really, an advocacy piece? That took a lot of work and then we had to start reaching out to community organizations that we wanted to partner with”.

This summer, the Ottawa Chapter has spearheaded many events including the International Day of Pink (April 13) with Starbucks partners proudly wearing pink to show their support, build awareness and stand up against bullying towards LGBTQIA2+ peers; the Pride & Remembrance Run (June 25), whereby the Chapter hosted a satellite event with over 30 partners participating; and Drag Bingo (July 25), a celebratory evening raising almost $1000 for the TenOaks Project, a charitable organization working to help children, youth and families from LGBTQIA2+ communities thrive.

The Ottawa Pride Chapter is looking forward to exploring how they can partner with community organizations year-round and what volunteer opportunities can be explored with all of their amazing partners moving forward.

Melissa, Angie and the team are excited to be participating in the 2022 Ottawa Pride Parade and are hoping for their largest turnout yet with 100+ partners. Local Starbucks stores will be donating and serving coffee, tea and pastries to the fabulous volunteers of this year’s Pride Parade.

“Starbucks is really leading the way in terms of not just saying it but doing it. It makes it easy for leaders like Angie and I to have that permission and that power to go out and do the work that we want to do. We feel supported in that, which is amazing. And I think it’s what’s needed right now in the world and our partners, the new generation of baristas and our stores; this is what they’re asking for and this is what they’re drawn to.”

Beyond fundraising and events, Starbucks Pride shirts and pronoun pins are just two ways Starbucks is speaking volumes, in Ottawa and beyond. As Angie puts it, there is power without words.

“The pins have brought so much conversation and nothing at all. I don’t have to say words when I wear my pin and I can see somebody look at it and then look at me,” says Angie. “I know that we’ve connected already, and we’ve already immediately created a safe space. The pins are very powerful.”

“I think I’m most excited to see how we grow and how this community expands. Not only our community of Starbucks partners, but how we can get out and reach our community that is in such need of love and support,” says Melissa.

As co-chair of the Area 26 Chapter, which covers Okanagan B.C. as well as Southern Alberta and Saskatchewan, Jaime (he/him) has one mission: allyship and amplifying the diverse voices within his community.

Jaime has been working at Starbucks since 1994. He began as a barista and is now a district manager and Area 26 Chapter leader within Starbucks Canada Pride Network, activating and engaging Starbucks partners to get involved in the community.

“When I joined 28 years ago, I wasn’t out. It took me a while to come out at Starbucks, realizing and building that trust. It’s so interesting to see where partners are at today, where they’re all about their identity,” says Jaime.

Through recent programs like the new pronoun pins, Jamie and his chapter have not only helped individuals understand why people use pronouns, they also educate on the greater goal of allyship across multiple provincial activations.

“I’ve heard from our partners, and they feel safe within our four walls to be able to be exactly who they are. And what I’ve also seen is that it trickles up, affecting even our managers,” says Jaime. “I’m thinking of one manager in particular that I work with who’s really just completely, fully come out and into herself, but has also been able to accelerate advocacy. I look forward to seeing people being empowered. I look forward to watching these leaders grow. I look at myself as more of a facilitator, but really, it’s these leaders that are building a network.”

Beyond the pronoun pins, other activities Area 26 have been involved in include volunteering and supporting Skipping Stone in Calgary, which focuses on transgender advocacy and support, Etcetera in Kelowna, which brings together queer youth in an intersectional, dynamic and supportive space, and various Pride festivals throughout the district, including Kelowna and Saskatoon.

“This year was the first year Starbucks has been a part of the Kelowna Pride Festival! It was an amazing opportunity to be involved in the community and see the impact we made,” says Madison (she/her), store manager and partner engagement lead for the Area 26 Chapter. “One of the partners who volunteered with us shared with me that it was the first time he ever felt safe and supported to be a part of an LGBTQIA2+ event and to feel like his authentic self. We served over 1,400 beverages and raised $725! The money went directly to the Etcetera youth program.”

“This was also the first time Starbucks participated in Saskatoon Pride and we had 50 partners, friends and family show up, including a four-month-old baby,” says Bobby, Partner Engagement Lead and Saskatoon store manager. “I really appreciate all partners for showing up and supporting each other.”

And the work doesn’t stop here. Jaime and his team of Starbucks partners are always on the lookout for new organizations and ways to support LGBTQIA2+ communities—a passion and drive that holds true to Starbucks Canada’s core values.

“Diversity has always been the thread of the fabric of this organization,” says Jaime. “We’re investing in good faith and humanity.” 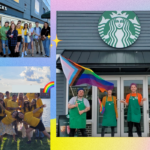