The company projects December 23 will be the busiest day for Starbucks Card purchases, and nearly $3 billion will be loaded on Starbucks Cards this season.

“Starbucks is one of the most gifted brands in the world, and we are honoured that our customers continue to give Starbucks Cards as a meaningful gift during the holiday season,” said Brady Brewer, Starbucks chief marketing officer. “Starbucks – in so many ways – is a currency of kindness. By giving a Starbucks Card, you’re giving an experience and opportunity to connect over coffee.”

Gift cards have been available at Starbucks since 1994 as an alternative to paper gift certificates, and Starbucks was among the first major retailers to offer a reloadable card, which debuted in 2001.That was the year Starbucks Cards became one of the most popular holiday gifts of the season, selling nearly 200,000 in the first week alone.

Starbucks eGift Cards can be purchased and gifted through the company’s website, the Starbucks app, Apple iMessage and Microsoft Teams, and can be sent with a personalized message for the recipient to include a special holiday greeting or wishes for a happy new year.

Starbucks Cards are the gift that keeps on giving. When customers register a Starbucks Card with the Starbucks Rewards loyalty program and make a qualifying purchase, they can start to earn Stars that can be redeemed for Starbucks beverages, food and more. Some restrictions apply. Details can be found at starbucks.ca/rewards.

Visit starbucks.ca/gift to view this year’s holiday designs and to learn more about all the ways to purchase a Starbucks Card. 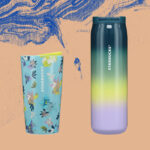 New Starbucks® merchandise to brighten up the new year

Get in the Holiday Spirit with New Festive Merchandise

The most festive season is here, and Starbucks recently debuted a new selection of colourful drinkware to get people in the holiday spirit! Customers can add a sprinkle of holiday cheer to their everyday coffee by sipping on their Peppermint Mochas or Iced Sugar Cookie Oat Lattes in the trendiest cups, mugs, and tumblers. The […]