Jeffrey Dugas lined up with dozens of other Starbucks partners early Wednesday morning, wearing iconic green aprons and carrying trays of cups of coffee, ready to pass them out to 2,000 district managers and other partners gathered in Seattle for a leadership conference.

The reason? The debut of a new coffee, Starbucks Green Apron Blend.

The coffee will be available in stores this summer, but Starbucks partners across stores in North America and at the conference got a first sip of it this week. The sneak peek seemed only fitting — after all, Starbucks partners were the ones who created and inspired it.

Nearly 24,000 Starbucks partners – almost all of them from stores across North America – collaborated on creating Starbucks Green Apron Blend. They shared their ideas for unique blend, including which coffee regions to include, the flavor and roast profiles and even the name of the coffee, said Michelle Burns, Starbucks executive vice president of global coffee, social impact and sustainability at the Seattle event.

Last spring, Starbucks kicked off a plan to reinvent the company, in collaboration with partners, with coffee at the core. The new coffee is a part of that and a symbol of what’s possible.

“Our challenge is to honour our heritage, while reimagining our future,” said Burns. “There’s no better way for us to do that than through coffee. So, we asked partners to help us develop our next blend – a coffee that represents our future, honors our past and shows us what’s possible when we work together.”

Forty percent of partners said Blonde roasts are their favorite and that they love sweet, nutty and fruity flavors. Partners also said they especially enjoyed coffees grown in Africa and Latin America.

The result is a light and lively Blonde roast, with hints of Honeybell orange and graham crackers, that pays homage to the retail partners across the globe who are a bright moment in their day for so many customers.

Dugas, a manager on Starbucks inclusion and diversity team who lives in San Antonio, Texas, said that as he passed out cups of coffee, he heard partners take their first slurp, a sound that rippled across the room, but what struck him was what came next. “There was a sound of ‘Ahhhh’,” he said.

It’s not just about the taste but what the coffee means, he said. “It’s something that brings us together. It’s about the connection.”

Dugas said that the most meaningful thing to him about the coffee is that it’s created by partners, for partners — a portion of the proceeds will be donated to the CUP Fund, a partner-funded program that helps partners in need (CUP stands for “Caring Unites Partners”).

“This coffee showcases our commitment to one another and the possibilities we unlock when we connect and collaborate,” said Burns. “It also shows the deep passion and love our partners have for coffee.”

Partners inspire beverages around the world

While the Starbucks Green Apron Blend is new, Starbucks has a history of developing beverages for stores that were created by retail partners, inspired by flavors unique to their regions: Axolotls in Mexico. Brigadeiros in Brazil. Roasted chestnuts in Japan. Caramel nuts in Puerto Rico. Some of their creations have been sold in stores to mark a milestone in their market, or simply to provide an opportunity for Starbucks baristas to shine, showing off their passion for coffee with pride.

Read on to learn more about delicious, innovative beverages around the world created by Starbucks partners:

The pink-orange axolotl, a species of salamander that is part of Mexico’s Aztec culture, was the catalyst for Scarlet, a barista in Mexico City, to invent the Ajolito Acaí Frappuccino®.

The strawberry-based recipe was created as part of a contest as Starbucks celebrated its 20th anniversary in Mexico. A portion of the proceeds of the three winning barista-invented Frappuccinos® were donated to environmental conservation organizations in Mexico.

In Japan, the esteemed Starbucks Coffee Ambassadors whipped up an tasty lineup for fall, featuring the flavors of roasted chestnuts. The four partners earned their titles through a nation-wide competition, giving them the opportunity to share their passion for coffee craft across Japan.

Starbucks celebrated its 20th anniversary in Puerto Rico in September with a limited-edition beverage created by Starbucks Barista Champions. The Choco Nut Spice beverage combined white mocha with caramel nut, oatmilk and cinnamon. A portion of the proceeds will be donated to a community non-profit organization.

Rachelle Askman and Kate Tanquary contributed to this article. 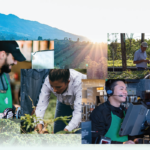